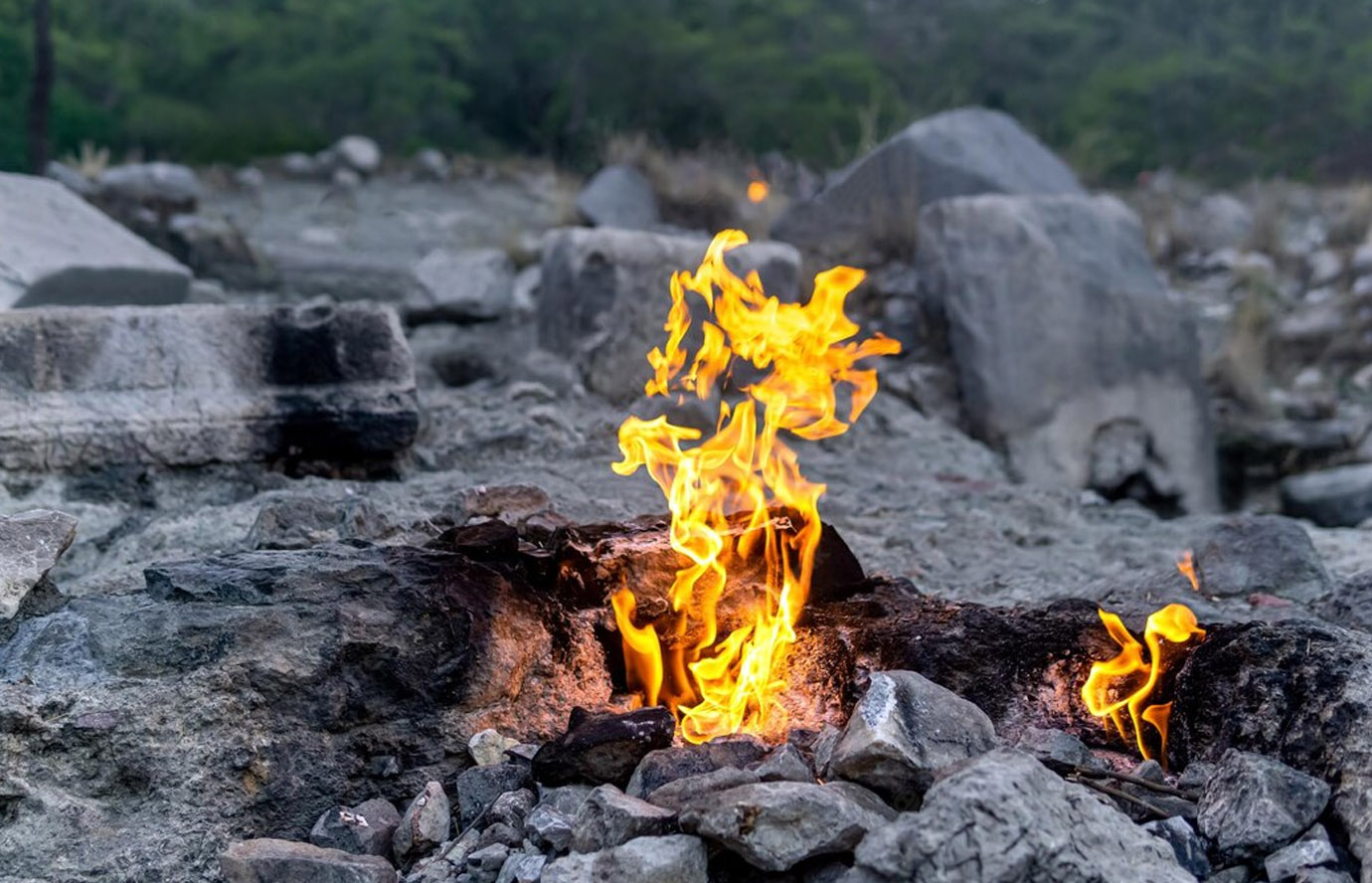 When you look at the hills in the Çıralı-Yanartaş natural site in Antalya’s Kemer district, you may think that they do not have any distinguishing features from the others, but when you climb up, you will realize that this place is not an ordinary place. In Çıralı, the methane gas leaking through the rocks in a region very close to the coast has been burning continuously for at least 2500 years.

It is said that in the past, sailors used the mountain as a kind of burning beacon, and that the flames were not seen, and it served as a wayfinding signal for boats. Today, tourists and locals use this never-ending fire to make tea or cook something. In order to solve the secret of this fire that has not been extinguished for centuries, scientists from both domestic and abroad have conducted research and examination in the region for years.

Giuseppe Etiope from the National Institute of Geophysics and Volcanology in Rome, and Artur Ionescu from Babes-Bolyai University in Cluj-Napoca, Romania, are working to solve the mystery of this fire, also known as the ‘Fire of Olympus’, which is constantly burning. had done. The conclusion that the gas burning at many points among the rocks is methane, but it is not known where this methane comes from, was published as an article abroad. However, it is thought that there was a leak from an underground gas field to the earth, that it started to burn with the effect of lightning in ancient times or the people of that period and continues to this day.

The location is 80 km southwest of Antalya, near the town of Çıralı. The area is located on a track popular with hikers and trekkers on the Lycian Way.

The Legend of  Yanartaş (Chimera)

In the ancient Greek period, a valiant son of the King of Ephyra lived in the province of Argos. This young man, whose real name is Hipponus, accidentally killed his brother Belleron while hunting one day. After this incident, they nicknamed him ‘Bellerophon’, which means ‘the one who ate Belleron’. The valiant Hipponus, who was very sad about his brother’s death and these events, left his father’s hearth in grief; He went to the city of Tiryns at that time, to Proitos, the king of that region, and became his guest.

Ante, the beautiful wife of King Proitos, fell in love with the handsome and valiant Hipponus. However, the young man, who was as honest as he was valiant, did not respond to the king’s wife’s love, and each time he somehow found his way out of the queen’s efforts to get closer.

Ante, who could not find a return for her love, said to her husband with greed and hatred: “If you do not kill Bellerophon, who wants to be with me by declaring your love for me, I ask the gods to curse you. ” said.

The King, who was very angry at his wife’s words, still did not want to dirty his hand with the blood of his guest. He wrote something on a board, wrapped it nine times, gave it to Bellerophon and gave the boy what he had; He told him to take him to his relative, King Lobates of Lycia. It was written on the board that the boy had molested the queen and therefore had to be killed. Unaware of all this, the young man took the death warrant under his arm and arrived at the king’s palace in Xanthos (Kınık), the capital city of Lycia.

King Lobates welcomed the young man with love and hosted him for nine days and nine nights. He cut a bull to his guest every day and offered it to him. On the morning of the tenth day, the king asked for the letter from his son-in-law Proitos. When the king read the letter, he understood that Bellerophon had to be killed. However, Lobates did not want to get blood on his hand and sent him to the Chimera dragon, which was terrifying in the land of Lycia.

The boy went to the place where the dragon lived, as he was told, and encountered this beast. The monster started to shoot fire from its mouth at the young man wherever he saw it. Bellerephon understood that he could not cope with this dragon alone and asked the gods for help.

Pegasus, known as the winged horse in mythology, was sent by the gods to help the boy. The young man caught this horse that came to help him and mounted it. Seeing Bellerephon on the horse, the dragon started to flee towards the east, but the sea was in front of the dragon. The young man caught the dragon on the shore of the sea, ascended to the sky with his horse and speared it above the Yanartaş hill, killing it.

Before the dragon died, the flames that he spewed out of his mouth with all his might for one last time fell everywhere. It is believed that this scorching fire of the dragon still burns right where it was killed.